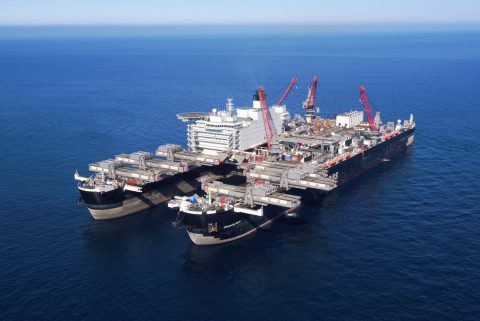 The world’s largest construction vessel Pioneering Spirit, owned by Allsesas, is set to leave Rotterdam on Saturday to begin work in Black Sea.

The vessel will install two 900-kilometer pipelines at 2200 meters water depth as part of the TurkStream project.

Allseas secured the contract for the installation of the first string of TurkStream in 2016.

Soon after the award, South Stream Transport B.V contracted Allseas for the installation of the second string of the gas pipeline.

The first string of the TurkStream gas pipeline is intended for Turkish consumers, while the second string will deliver gas to southern and southeastern Europe.

Each string of TurkStream will have the throughput capacity of 15.75 billion cubic meters of gas per year.

Specially for this project, Pioneering Spirit is equipped with a so-called “stinger”, a truss construction over which the pipeline is directed to the seabed, Allseas noted.

In addition to Pioneering Spirit, Allseas Audacia vessel has started operations on the TurkStream installation.

The vessel will be also used for pipe pulling through microtunnels.