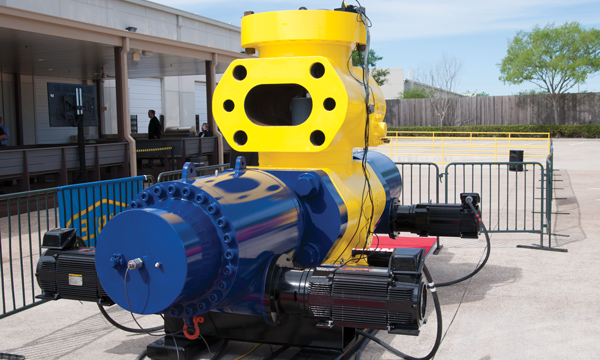 Game-changing technologies often take years to incubate. In the case of Noble Drilling’s new electrically operated blowout preventer (eBOP), the journey from idea to reality has taken more than a decade, but the company believes the industry is now ripe for this kind of disruptive technology.

On 30 March, Noble showcased the results of its work with a live demonstration at the NobleAdvances Training and Collaboration Center in Sugar Land, Texas. A prototype of the eBOP successfully sheared a 6 5/8 in. S-135 27-lb/ft drill pipe during the demo event.

“At Noble, we believe that the eBOP holds the key to decreased complexity, and by doing this, increases reliability and performance,” Robert Van Kuilenburg, Noble’s Mechanical Engineering Manager, said.

The idea for the eBOP was conceived back in 2003. The vision was to build an electrically operated shear ram that – without the use of hydraulic power – could close with a 2 million-lb force at any water depth. A simplified control system would be used to safely drive the ram, without discharging any fluid to the marine environment.

Although the company recognized the potential associated with this idea, at the time the industry still lacked individual components with the required capabilities, and the project was put on the back burner. In 2014, Noble’s Research & Development Team began to revisit the idea in response to market conditions and proposed regulatory changes. Development began in earnest when the company realized that the necessary components, including improved battery technology, were now available and able to deliver reliable performance. The 6 5/8-in. S-135 27-lb/ft drill pipe was successfully sheared during the demonstration event. The 2 million-lb force was not applied in this demonstration.

The first prototype used a ball screw with two electrical motors, generating a closing force of 500,000 lb. This evolved into the current version, which has a closing force of 2 million lb. Key features of the eBOP are its simplified mechanical design, new battery technology, and a gas boost that allows the equipment to achieve the 2 million-lb closing force. A production version would feature electric motors routinely used on remote operated vehicles (ROVs).

Noble believes that this technology has the potential to be a catalyst for innovation and, with further development, become the standard for future subsea BOP designs, Mr Van Kuilenburg said.

Although electrical alternatives to BOPs had been suggested before by others in the industry, Noble’s goal was to develop a technology with reduced system complexity, including a simpler control system, that would yield improved reliability and accuracy in ram movement. Conventional BOPs, which run on hydraulic power, are highly complex systems that require significant maintenance. Many system failures are self-inflicted, meaning they result from system faults such as tight tolerances, difficult access or too many components, Mr Van Kuilenburg said. The MUX control system of hydraulic BOPs, one of the most complex elements of a drilling rig, is a hotspot for such failures.

The eBOP features a significant reduction in the number of components compared with hydraulic BOPs – it has only 131 parts in total, of which only 17 are unique to the design. Further, the drive and charging systems have no moving parts. These achievements were enabled partly by combining several structural pieces into larger modules. A key focus for Noble is simplifying the design for increased ram accuracy and reliability, said Patrick O’Neill, Noble’s Director of Research and Development. “If you reduce the number of components, you reduce your potential failure points,” he explained.

The eBOP features a decentralized control system, which can be interfaced with ROVs in multiple ways. The subsea hydraulic accumulators are replaced with batteries, and the conventional open-loop system – where hydraulic fluid is released into the environment after activation – is eliminated, resulting in a zero discharge system. Compared with conventional BOPs, the eBOP delivers a smoother and cleaner cut across drill pipes. Further testing of the eBOP is set to begin in May and will focus on functionality and controllability checks.

The shearing force of the eBOP is generated by the combined power of a nitrogen booster cylinder and a roller screw drive, which Mr Van Kuilenburg calls “the heart of the eBOP.” The nitrogen is a source of stored energy, and anything requiring less than 1 million lb of shearing will feed energy back into the batteries. The design of the roller screw and load bearings were optimized for the eBOP by SKF Manufacturing, a supplier of rolling bearings, seals, mechatronics, services and lubrication systems. “This is a great example of leveraging the experience of different industry partners,” he added.

For the next phase of the project, Noble is planning to collaborate with an original equipment manufacturer, classification authorities and interested operators, said Scott Marks, Senior Vice President of Engineering. The final choice of the eBOP’s system layout will require input from these partners to ensure a proper path to market. “Advancing the eBOP technology will take coordination of industry partners, regulatory verification and further development of key relationships, which will prove to be pivotal to the growth of the eBOP program,” Mr O’Neill said, adding that everyone in the industry is a potential partner to Noble.

The company also emphasized it remains fully committed to its core business of offshore drilling and the efficient and safe operations of a modern ultra-deepwater and high-specification jackup fleet. Noble has no interest in entering the BOP business as a manufacturer; rather, the goal is to provide an alternative technology to current BOP designs and to work with the industry to commercialize the eBOP appropriately, according to Mr O’Neill.

Further testing of the eBOP is set to begin in May and will focus on functionality and controllability checks. “We will continue to push the limits of this equipment,” Mr O’Neill said. “We have scheduled tests in the near future for shearing drill collars, heavy walled casing, and our 2 million-lb test.”

“An old Noble statement says, ‘Begin with the end in mind,’” Mr Van Kuilenburg said. “Noble is of the opinion that the end goal – a reliable, efficient and safe BOP – is best fulfilled with the eBOP. So far, the prototype shows great promise, and we have only begun to map out its true potential.” DC

eBOP is a registered term of Noble.