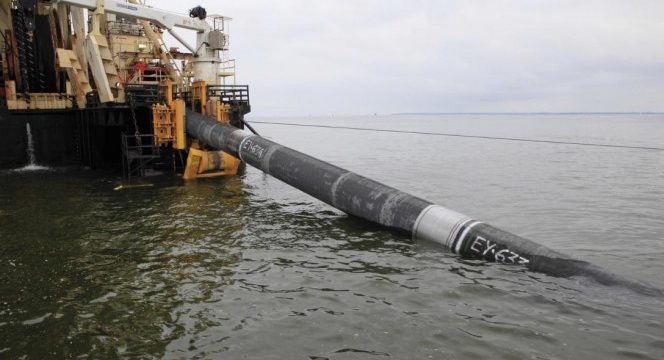 Nord Stream 2 finalized a deal with Allseas for the offshore pipelay of the Nord Stream 2 natural gas pipeline though the Baltic Sea last week, as the Gazprom-led company moves to begin the environmental impact assessment (EIA) procedure in Russia for the project.

As part of the agreement with Allseas, Nord Stream 2 will begin offshore pipelay works for both lines in 2018 and 2019. Allseas will use three pipelay vessels for the project; the mega vessel Pioneering Spirit, Solitaire and Audacia.

“The utilization of the dynamically-positioned pipelay vessels, which are able to carry out precise maneuvering without anchors, should ensure additional environmental protection and safety in the congested Baltic Sea,” says Nord Stream 2.

Allseas’ Solitaire previously laid parts of the Nord Stream pipeline in the Gulf of Finland.

Nord Stream 2 will be a twin pipeline stretching 1200km through the Baltic Sea. Each line will comprise around 100,000 individual pipes, each 12m in length. Once pipe-laying begins, up to 3km of pipe can be laid each day.

The Nord Stream 2 pipeline will begin from the coast of Russia and reaching landfall near Greifswald in Germany. It will run roughly parallel to the existing Nord Stream pipeline, and pass through the territorial waters and/or the exclusive economic zones (EEZs) of Russia, Finland, Sweden, Denmark, and Germany.

The 12m pipe sections will be welded together and then laid the Baltic Sea using a pipelay vessel. Every weld is tested to ensure that it meets Nord Stream 2’s high quality standards, and the completed pipeline will undergo further testing by an independent certification body before gas can flow, says the company.

The deal follows the letter of intent agreed between both parties last December. Other tenders including the near-shore pipelay tenders in Russia and Germany are ongoing.

Today (12 April), Nord Stream says it started the EIA procedure in Russia, disclosing relevant project documents, which include the terms of reference and the EIA program.

“In addition to the required documents, the company also published the reports prepared by independent environmental consultants providing a comparative environmental assessment of the route options for the Russian section of the Nord Stream 2 pipeline. The reports present the results of the comprehensive analysis of various technical, environmental, social and economic factors,” says Nord Stream 2.

The company revealed that based on the comprehensive analysis of the route and landfall options, the Narva Bay route in the Kingisepp District of the Leningrad Region has been defined as the preferred option due to its smaller overall environmental and social impact. The final decision on the Russian landfall will be made by the Russian environmental authorities.

In the next phase, Nord Stream 2 will carry out the EIA in line with the terms of reference and present the draft EIA report for public consultation.

“The EIA procedure is the main condition for obtaining the required permits to build the new pipeline through the Baltic Sea. The EIA includes analysis of hydrometeorological, geological, biological, social, economic and other conditions, as well as nature protected areas, rare species, vulnerable habitats and other factors. The EIA assesses all potential environmental and social impacts from the planned activities and describes environmental protection measures,” Nord Stream 2 says.

“On top of compliance with Russian law, Nord Stream 2, as a responsible developer of a major infrastructure project, has committed to applying best practices and adhering to international environmental and social standards,” says Simon Bonnell, head of permitting, Nord Stream 2. “We are aware of our responsibility to preserve the conservation value of all sensitive areas to be traversed by Nord Stream 2. Our experts are developing optimal technical solutions and a comprehensive biodiversity conservation plan. As a next step, we will discuss our proposals with the expert community and relevant authorities.”